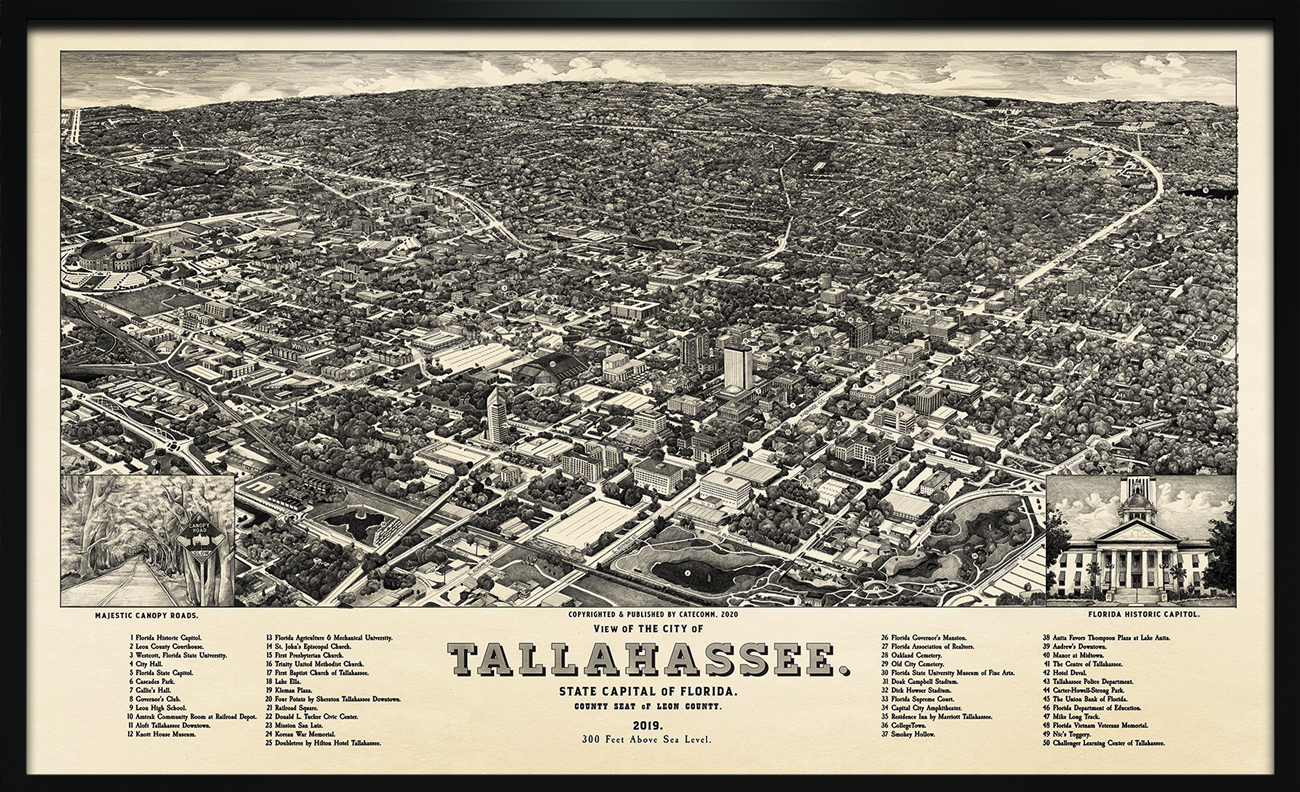 The City of Tallahassee, Florida has a rich, influential history.

Originally occupied by Native Americans and called “Old Town” or “Old Fields,” Tallahassee, Florida’s Capital City, was inexplicably described as “grotesque” by author Ralph Waldo Emerson in 1827. But as early as 1875, our City was being heralded by poet Sidney Lanier. And in 1882, newspaper reporter George Barbour proclaimed Tallahassee one of the loveliest places in all of America. We agree.

That’s about the time the Milwaukee lithographic firm of Beck & Pauli published a hand-drawn bird’s eye panorama of the blossoming city dubbed “the floral city of the flowery South.”

This document, now housed in the United States Library of Congress, is a snapshot of a city that would later become the “All American City” we all know and love.

And, with all that’s happened since, and everything we can learn from maps, we decided that it's about time for a new snapshot. 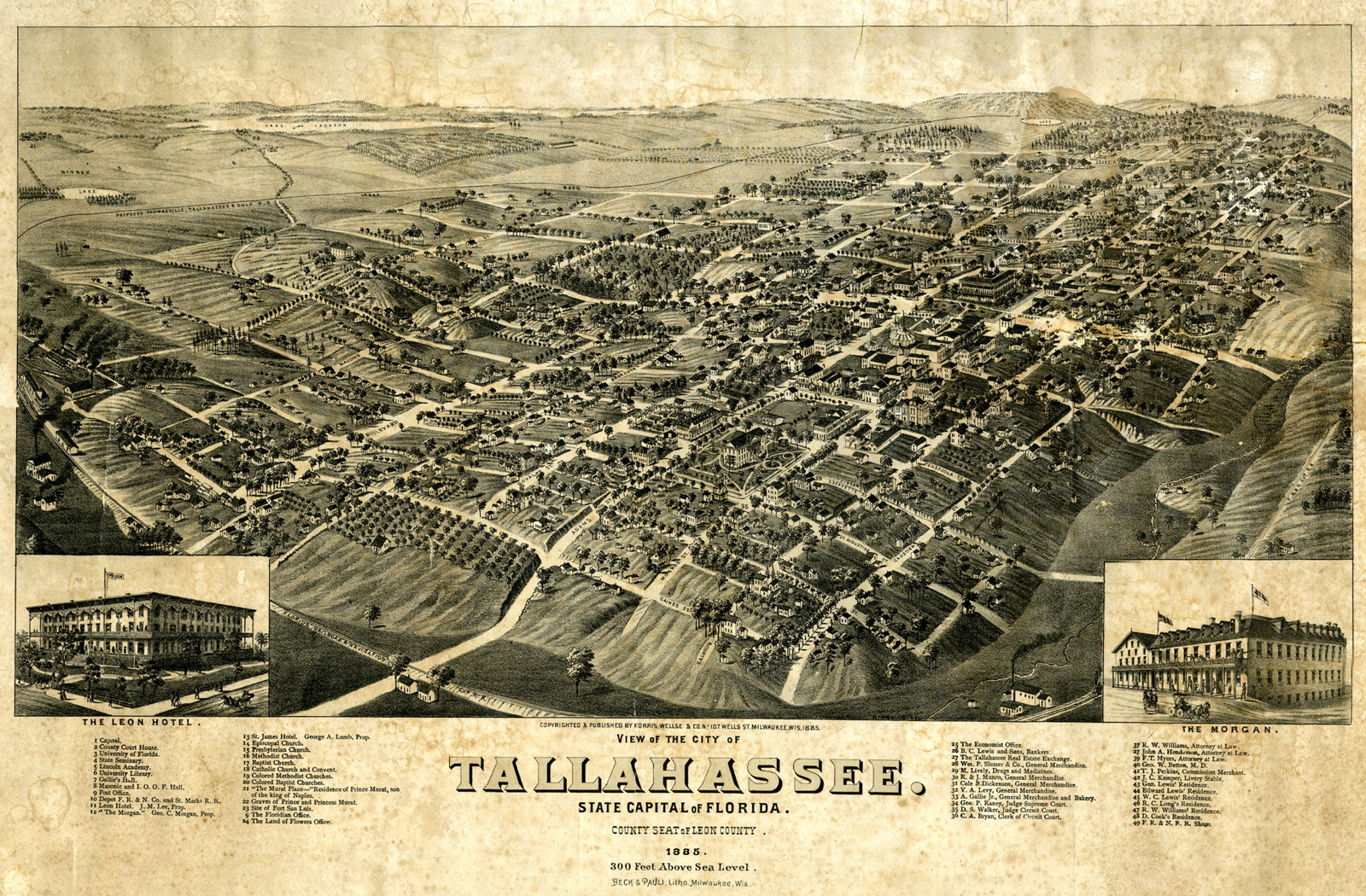 With a nod to the beautiful, handcrafted detail of the 1885 panorama, “View of the City of Tallahassee,” CATECOMM, headquartered in Tallahassee, and Tallahassee-based artist Jenn Whitcomb have hand drawn a 2019 snapshot panorama, printed locally on museum quality paper so you own a piece of this history.

And $100 from every purchase will benefit local nonprofits preserving and improving Tallahassee. 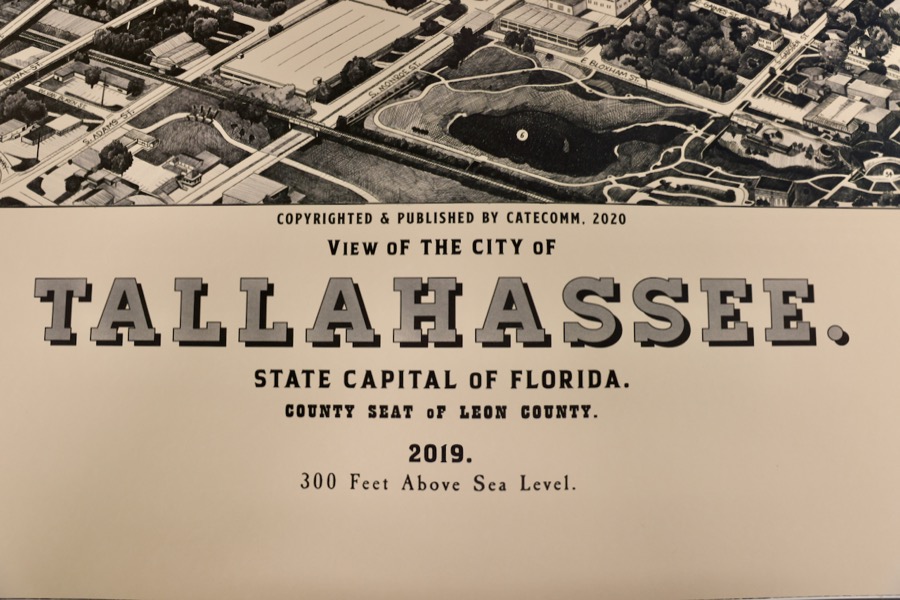 Faithful to the original 1885 lithograph style. 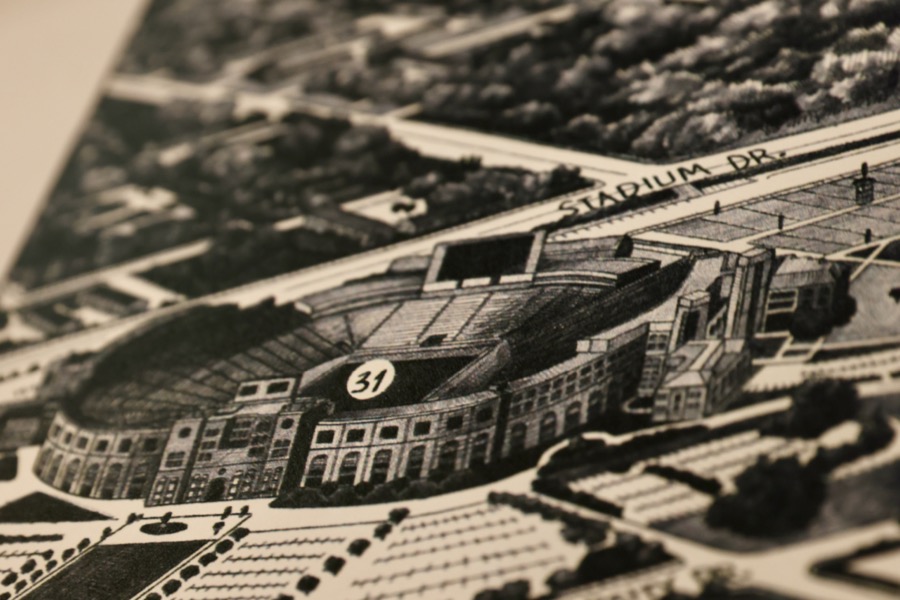 Every building is its own detailed piece of art. 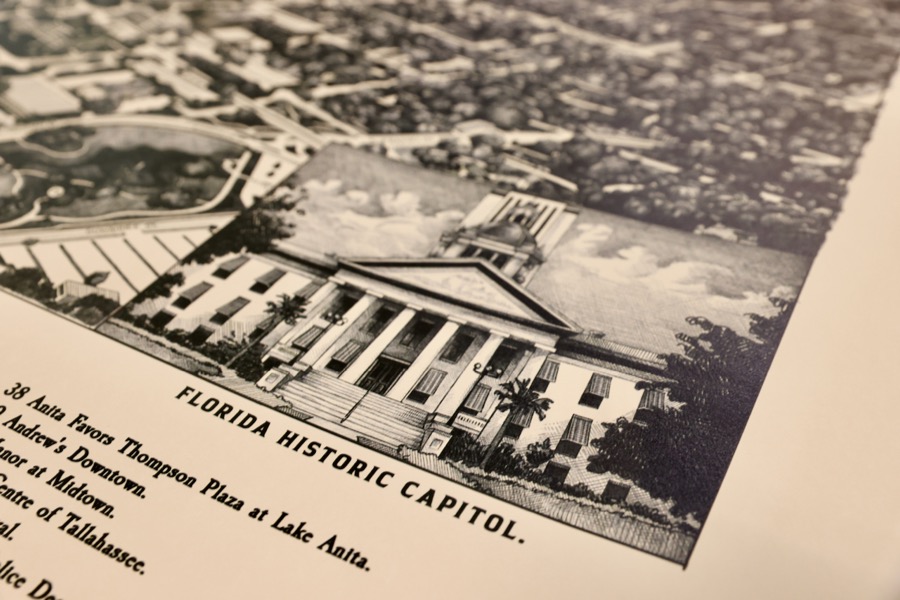 Call out corners include the Florida Historic Capitol and Majestic Canopy Roads. 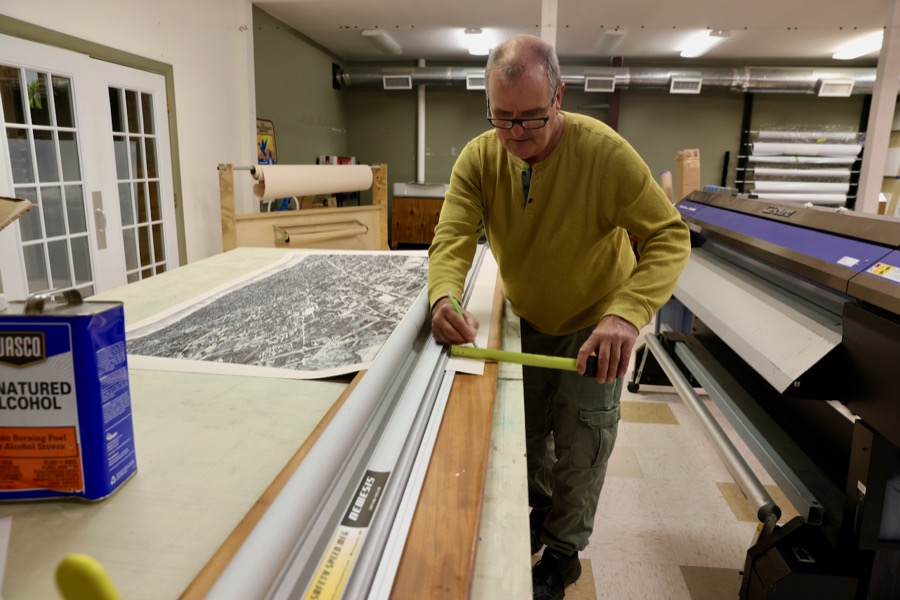 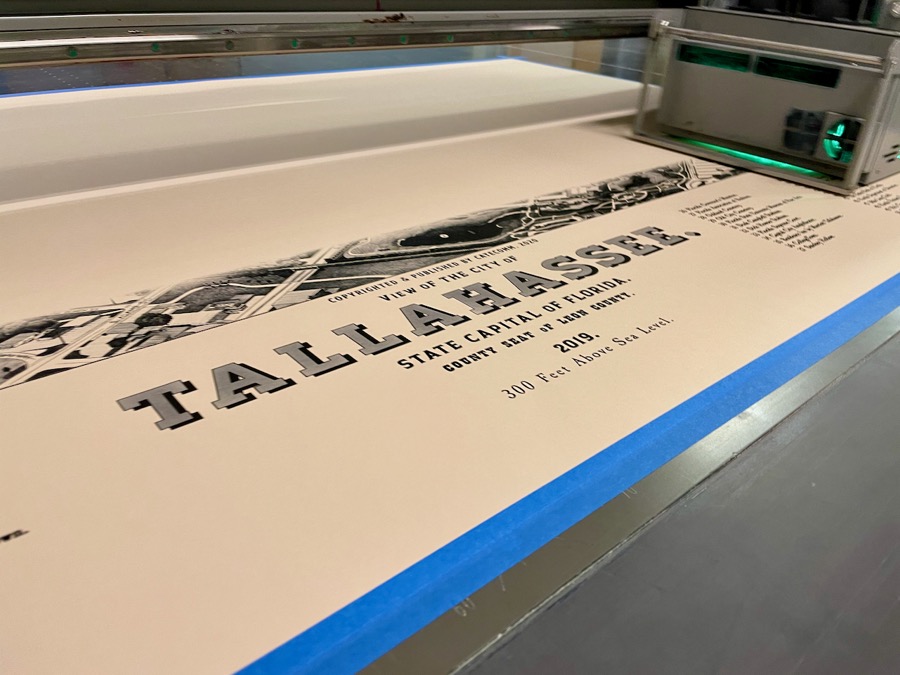 Printed on a large-format UV flatbed, with ink cured by ultraviolet LED light as soon as it touches the paper, creating a precise high-quality print. 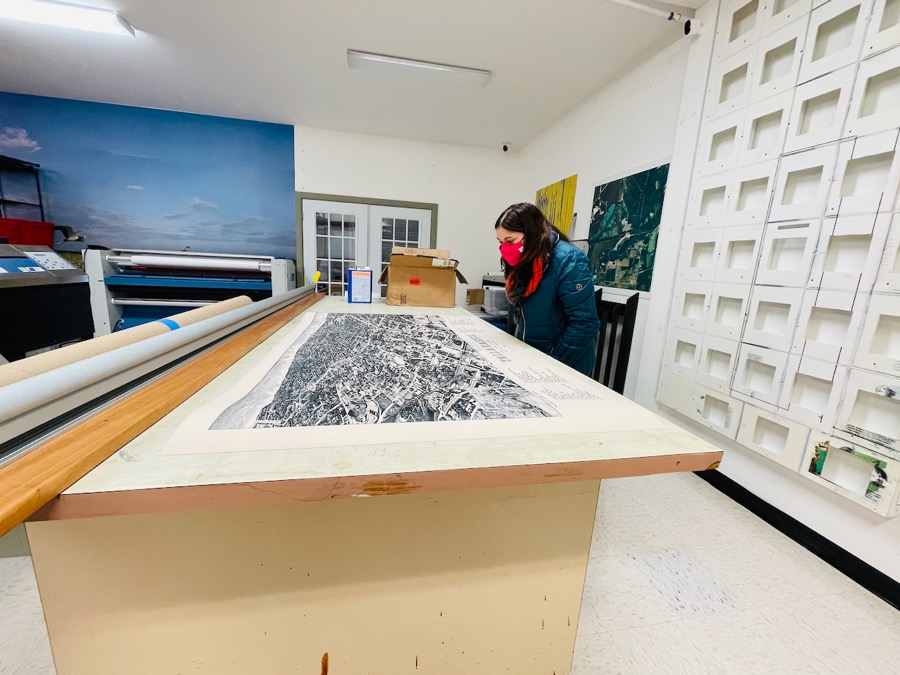 During the March 24, 2021 City Commission meeting, the Tallahassee City Commission unanimously approved the acceptance and display of one of the first 37" x 60" prints of our City of Tallahassee Map at City Hall, alongside the famous 1885 and 1926 lithographs.

Own this piece of history in its original size, meant to be a show-stopping piece of art for any office, business, or home. Each print is hand numbered and hand signed.

This edition brings to life the original full-size map in a print that can impress in any location.